We only live once

Life is like a roller coaster, live it, be happy, enjoy life. 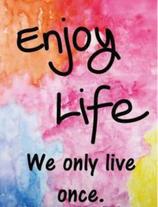 Here we are February first and like every other year on the first day of February I find myself a year older. This year I also find that my body has become very mature while my mind seems to be a little more immature.

I was somewhat overwhelmed yesterday by the amount of birthday greetings I received from here and abroad. It reminded my how lucky I am that I know so many of you and how my life is enhanced by your presence.

Yesterday I also received an article from Marc Chernoff where he described 20 Things that Will Matter a Lot Less to You in 20 Years. As I look back on my long life I can testify that he is right on target. There are too many thoughts to share them all here but I have included some that hit home for me.

The inevitable frustrations of an average day. – 99.9% of what’s stressing you out today won’t matter a month from now.  Sooner or later you will know this for certain.  So just do your best to let go of the nonsense, stay positive, and move forward with your life.

How “perfect” everything could be, or should be. – Understanding the difference between reasonable striving and perfectionism is critical to letting go of fantasies and picking up your life.  Perfectionism not only causes you unnecessary stress and anxiety from the superficial need to always “get it right,” it actually prevents you from getting anything worthwhile done at all.

Having complete confidence before taking the first step. – Confidence is that inner inertia that propels us to bypass our empty fears and self-doubts.  On the road of life, we come to realize that we rarely have confidence when we begin anew, but as we move forward and tap into our inner and outer resources, our confidence gradually builds.  A common mistake many young people make is wanting to feel confident before they start something, whether it’s a new job, a new relationship, living in a new city, etc.  But it doesn’t happen like that.  You have to step out of your comfort zone, and risk your pride, to earn the reward of finding your confidence.

Having a calendar jam-packed with exciting, elaborate plans. – Don’t jam your life with plans.  Leave space.  Over time you will learn that many great things happen unplanned, and some big regrets happen by not reaching exactly what was planned.  So keep your life ordered and your schedule under-booked.  Create a foundation with a soft place to land, a wide margin of error, and room to think and breathe every step of the way.

Winning everyone’s approval. – It’s the strength of your conviction that determines your level of personal success in the long run, not the number of people who agree with every little thing you do.  Ultimately, you will know that you’ve made the right decisions and followed the proper path when there is genuine peace in your heart.

Judging others for their shortcomings. – We all have days when we’re not our best.  And the older we grow, the more we realize how important it is to give others the break we hope the world will give us on our own bad days.  Truly, you never know what someone has been through in their life, or what they’re going through today.  Just be kind, generous and respectful… and then be on your way.

Distant future possibilities. – As time passes, you naturally have more of it behind you and less of it in front of you.  The distant future, then, gradually has less value to you personally.  But that doesn’t really matter, because the good life always begins right now, when you stop waiting for a better one.  Don’t wait until your life is almost over to realize how good it has been.  The secret to happiness and peace is letting this moment be what it is, instead of what you think it should be, and then making the very best of it.

Lighten up, just enjoy life, smile more, laugh more, and don't get so worked up about things.

An airline pilot was scheduled to take a flight from New York to Los Angeles. The weather was too bad in New York to allow his usual on time departure. The weather in New York finally cleared and the pilot asked for his departure clearance. He was very dismayed to hear that he had another delay due to the increased traffic now leaving New York.

Sometime later he finally received his clearance and decided he would try to make up the time lost by asking for a direct route to Los Angeles. Halfway across the country he was told to turn due South.

Knowing that this turn would now throw him further behind schedule he inquired, quite agitated, to the controller for the reason of the turn off course. The controller replied that the turn was for noise abatement.

The pilot was infuriated and said to the controller, "Look buddy, I am already way behind schedule with all the delays you guys have given me today. I really don't see how I could be causing a noise problem for pedestrians when I am over six miles above the earth!"

The controller answered in a calm voice, "Apparently, Captain, you have never heard two 747s collide!"

My mail is a little slow.  Last month my flower seeds came as a bouquet.

The Politically Correct National Football League would like to announce its name changes and schedules for the 17/18 season:

In Week 2, there are several key matchups, highlighted by the showdown between the San Francisco Precious Metal Enthusiasts and the New Orleans Pretty Good People. The Atlanta Birds of Prey will play host to the Philadelphia Birds of Prey, while the Seattle Birds of Prey will visit the Phoenix Male Finches.

The Monday night game will pit the Miami Pelagic Percoid Food Fishes against the Denver Untamed Beasts of Burden. The Cincinnati Large Bangladeshi Carnivorous Mammals will travel to Tampa Bay for a clash with the West Indies Free booters later in Week 9. And the Detroit Large Carnivorous Cats will play the Chicago Securities-Traders-in-a-Declining-Market.

Misers aren't much fun to live with, but they make great ancestors.

A Sunday school teacher said to her children, "We have been learning how powerful kings and queens were in Bible times. But, there is a higher power. Can anybody tell me what it is?"

One child blurted out, "Aces!"

To fight fear, act. To increase fear—wait, put off, postpone.

My niece, pregnant with her second child, was certain she wanted an epidural for pain management during childbirth. Her doctor asked her at which stage of labor she wanted the epidural administered.

Her response: "Just meet me in the parking lot!"

The guest lecturer to a famous Medical College stopped by the bulletin board on his way to the lecture room. Listed for the day was the topic, "Surprises in Obstetrics." Scrawled under it in pencil were the words,

"Mary had a little lamb."