We are blessed by the unselfish 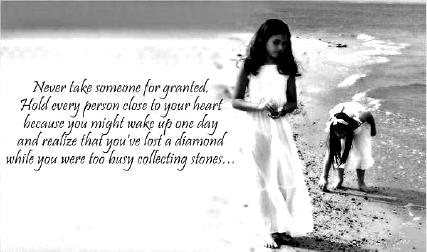 The people in my country will be celebrating our national independence over the next three days. Monday will be a holiday so the next Daily will be published on Tuesday.

To most the Independence Day Holiday is thought of only as a celebration our nation acquiring the ability to self-govern. For me it is more than that for it also laid the foundation for us to be individually independent, to be who we want to be within the limits necessary to assure that we are safe and while given the chance to prosper.

It is not so much my freedom to live in a feree society as it is my freedom to be me, without the requirement to be like everyone else. I am not sure I would have reflected on my personal freedom if it was not for a friend telling me yesterday that many people tell her she is too unselfish. Is that not the same as telling her that she should be selfish? The more I mulled this over the more I realized that many of us get criticized because we often put others first. Some who spend their time in service are even derided to the point they are called bleeding hearts, as if that was a bad thing.

How sad it is that so many have become so cynical that they subscribe to the concept of always me first. These are the people who are the line jumpers, the complainers and often the bullies that we see far too often. Even worse is the fact they seem to believe that their behavior proves their superiority and that their ability to outwit and even cheat others demonstrates how clever they are.

My friend is far superior in my mind. My friend and others like her seem to find great reward as they make life a little better for someone else. These people are seldom devious and they never resort to subterfuge. They find that a trusting attitude is much better than being constantly suspicious. Naive maybe, but so what? They may get burned once in a while but they would not have been burned if they had not been out there doing something. What I love is that these are the folks who have declared their independence and to paraphrase a revolutionary war quote quietly shout “Damn the critics, full speed ahead.” I hope they never change for I would hate to live in a world without them.

The new Ensign was assigned to subs, where he'd dreamed of working since a young boy. He was trying to impress the Master Chief with his expertise learned in Sub School.

Those who can't laugh at themselves leave the job to others.

She was trying to get her seventh-grade history class to understand how the Indians must have felt when they first encountered the Spanish explorers. "How would you feel," she asked, "if someone showed up on your doorstep who looked very different, spoke a strange language and wore unusual clothes? Wouldn't you be a bit scared?"

"Nah," one boy answered, "I'd just figure it was my sister's date."

Home is where you can say anything you like 'cause nobody listens to you anyway.

An old fellow came into the hospital truly on death's door due to an infected gallbladder. The surgeon who removed the gallbladder was adamant that his patients be up and walking in the hall the day after surgery, to help prevent blood clots forming in the leg veins. The nurses walked the patient in the hall as ordered. On the third day the had the old fellow up and the nurse told how he complained bitterly each time they did. The surgeon told them to keep walking him, no matter what.

After a fortnight, the patient was ready to go home. His family came to pick him up and thanked the surgeon profusely for what he had done for their father, telling him he was a miracle worker. The surgeon was pleased and appreciated the thanks, but told them that it was really a simple operation and that they had been lucky to get him into the hospital time.

"Oh no, doctor, you don't understand," they said, "Our father hasn't walked in over a year!"

“You may be deceived if you trust too much, but you will live in torment if you don't trust enough.”

The proud father brought home a backyard swing set for his children and immediately started to assemble it with all the neighborhood children anxiously waiting to play on it. After several hours of reading the directions, attempting to fit bolt A into slot B, etc., he finally gave up and called upon an old handyman working in a neighboring yard. The old-timer came over, threw the directions away, and in a short while had the set completely assembled.

It's beyond me," said the father, "how you got it together without even reading instructions."

"To tell the truth," replied the old-timer, "I can't read, and when you can't read, you've got to think."

Jewish Mothers don't differ from any other in the world when it comes to bragging about their sons.  One Mother, trying to out-do another when it came to opportunities available to their just graduated-from-college sons said, "My Irving has had so many fine interviews, his resume is now in its fifth printing."

“There is a magnet in your heart that will attract true friends. That magnet is unselfishness, thinking of others first... when you learn to live for others, they will live for you.”