We are back to the simple life

“The ability to simplify means to eliminate the unnecessary so that the necessary may speak.” 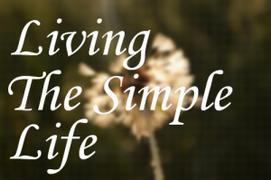 Hi everyone, yes Ray’s Daily is back. I had spent the last four days trying to recover from a corrupted data file that locked out my mail software including the Daily’s distribution lists. Yesterday I purchased the latest Microsoft Outlook and then spent about seven hours interacting with a Philippine Microsoft Technician as she worked out a solution to the data corruption. I am glad that’s over so we can get back to normal.

In my case it is getting back to my new normal which is my much simpler life style, I am still somewhat uncomfortable not doing what I use to do but I am adjusting. There is a lot to be said for a simpler life. Recently Angel Chernoff sent out a piece that listed how her and her husband Marc have learned how to sustain a manageable life, here is what she wrote.

Some lessons I’ve learned about living a simpler life:

1.         A simpler life is about subtracting the obvious and adding the meaningful. Thus, you are wealthy in proportion to the number of unnecessary things you can afford to live without.

3.         Letting go of old routines and habits and building new ones can be hard, but it’s easier if you do a 30-day challenge. Let go of something for 30 days and see how it affects your life. (Letting go of cable TV was one of the best decisions Marc and I made this past year – no more continuous, random, distracting noise in our home.)

5.         Decluttering your physical space can lead to a less cluttered mental space. These visual distractions pull on us and distract us in more ways than we often realize.

7.         Positivity always pays off in simplifying outcomes. So before you waste it on anger, resentment, spite or envy, think of how precious and irreplaceable your time is.

8.         The simplest secret to happiness and peace in the present is letting every circumstance be what it is, instead of what you think it should be, and making the best of it.

9.         Gratitude always makes life easier to deal with. Because happiness comes easier when you stop complaining about your problems and you start being grateful for all the problems you don’t have.

“When you are content to be simply yourself and don’t compare or compete, everybody will respect you.”

A man asks his guru, "Do you have anything that stops the aging process?"

The guru responds, "Sure. What kind of disease would you like?"

A husband and wife were involved in a petty argument, both of them unwilling to admit they might be in error.

He agreed and, like a gentleman, insisted she go first.

With a twinkle in his eye, he responded, "You're right!"

I know that there are people in this world who do not love their fellow man, and I hate people like that.

She said: While trying to explain to our five-year-old daughter how much technology had changed, my husband pointed to our brand-new personal computer and told her that when he was in college, a computer with the same amount of power would have been the size of a house.

Wide-eyed, our daughter asked, "How big was the mouse?"

A positive attitude will not solve all your problems, but it will annoy enough people to make it worth the effort.

Anne meets up with Dana as she is picking her car up from the mechanic.

Anne asks, "Everything ok with your car now?"

Dana replies, "Yes, thank goodness.  I was worried that my mechanic might try to rip me off, so I was relieved when he told me all I needed was $12 worth of blinker fluid."

"I still believe that love is all you need.

I don't know a better message than that."

The Italian composer, Rossini, went to see his doctor. After examining him, the doctor said, "Your trouble stems from wine, women and song."

Rossini suggested, "Well, I can get along without the songs, since I compose my own."

The doctor said, "Well, which of the other two are you prepared to give up?" Rossini relied, "That depends entirely on the vintage."

"Never explain--your friends do not need it and your enemies will not believe you anyway."

"You're LATE," the man said to the conductor.  "What's the use of having a schedule if you're going to be late anyway?"

The Conductor looked at him, and said, "Sir, if we didn't have a schedule, how on earth would you realize what time you were supposed to be at the station?  And how would you know that we were late?"

"The generation of random numbers is too important to be left to chance."

A famed English explorer was invited to Dartmouth to tell of his adventures in the African jungle.

"Can you imagine," he demanded, "people so primitive that they love to eat the embryo of certain birds, and slices from the belly of certain animals? And grind up grass seed, make it into a paste, burn it over a fire, then smear it with a greasy mess they extract from the mammary fluid of certain other animals?"

When the students looked startled by such barbarism, the explorer added softly, "What I've been describing, of course, is a breakfast of bacon and eggs and buttered toast."

"I like long walks, especially when they are taken by people who annoy me."

Billy Bob and Lester were talking one afternoon when Billy Bob told Lester, "Ya know, I reckon I'm about ready for a vacation. Only this year I'm gonna do it a little different. The last two years I took your suggestions as to where to go. Three years ago you said to go to Hawaii. I went to Hawaii and Marie got pregnant. Then two years ago you told me to go to the Bahamas, and Marie got pregnant again. Last year you suggested Tahiti and darned if Marie didn't get pregnant again.

Lester asks Billy Bob, "So what you gonna do this year that's different?"

Billy Bob says, "This year, I'm takin' Marie with me."

“A simple life is not seeing how little we can get by with—that’s poverty—but how efficiently we can put first things first. . . . When you’re clear about your purpose and your priorities, you can painlessly discard whatever does not support these, whether it’s clutter in your cabinets or commitments on your calendar.”