Wake me when it's over

Courage is not the absence of fear, but rather the judgement that something else is more important than fear. 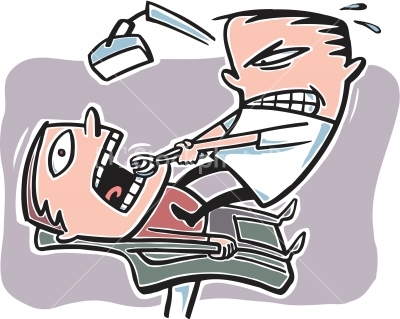 I hope you had a great three day holiday weekend if you are a reader in the U.S. (it was a national holiday yesterday). I had planned on a totally uneventful long weekend at home and I am glad that was the plan for on Friday I broke an upper front tooth at the gum line and look even worse than usual. Fortunately my dentist is a friend and fellow Kiwanis member who came into his office on his long weekend holiday to do some preparation for the root removal and more next Wednesday, Since the extraction can be a little messy I needed to go off my blood thinner for a few days to make sure any bleeding is controllable. So on Wednesday I’ll spend a couple of hours in the dental chair getting a temporary fix. As I understand it the final fix will have to wait until the socket is fully healed. While I am sure I am getting a fair price it will be high enough to eliminate any need to consider an additional cruise this year.

The tooth that broke had been dead and discolored for some time and was on borrowed time anyway so things could have been much worse, especially if I had been away. So tomorrow I’ll be attempting to be a brave trooper as I spend a major part of the day being worked on by what I hope will still be my friend when he is done. Fortunately I know that Wednesday will make the rest of the week seem much better than it might otherwise. I also am confident that the procedure will continue to be missing on my favorite-things-to-do list. Piet Hein describes it in his poem

To be brave is to behave

bravely when your heart is faint.

So you can be really brave

only when you really ain't.

Don’t be a sissy!

New York: One hand on wheel, one finger out window.

New Jersey: One hand on wheel, one finger out window, cutting across all lanes of traffic.

Boston: One hand on wheel, one hand on newspaper, foot solidly on accelerator.

Toronto: Both hands clenched on steering wheel, driver staring directly forward, cutting in front of you and slowing down to 40 in a 60 zone then looking in rearview mirror in wonder as to why the car behind is flashing high beams.

Los Angeles: One hand on wheel, one hand on nonfat double decaf cappuccino, cradling cell phone, brick on accelerator with gun in lap.

Ohio, but driving in California: Both hands on wheel, eyes shut, both feet on brake, quivering in terror.

Italy: Both hands in air and gesturing, both feet on accelerator, head turned to talk to someone in back seat.

Seattle: One hand on latte, one knee on wheel, cradling cell phone, foot on brake, mind on game.

Texas: One hand on wheel, one hand on hunting rifle, alternating between both feet being on the accelerator and both feet on the brake, throwing a McDonald's bag out the window.

Florida: Two hands gripping wheel, blue hair barely visible above window level, driving 35 on the Interstate in the left lane with the left blinker on.

Life isn't about how to survive the storm, but how to dance in the rain.

A woman, her husband and their three rambunctious young sons were in their car waiting at a traffic light. The woman glanced over at the car next to them, noticing a blissfully happy mother with her baby daughter. Looking at her husband, she said, "As soon as I lose my weight from the last baby, I want to try for a daughter."

The husband reached up to the dash, grabbed an open box of snacks and said, "Here, have another cookie."

If you break your neck, if you have nothing to eat, if your house is on fire--then you got a problem. Everything else is inconvenience.

A very excited woman calls the fire department. "Help me! My house is on fire!"

"Where do you live?"

"I am too excited. I can't tell you the exact address!"

"How do you expect us to get there?"

Just think, if it weren't for marriage, men would go through life thinking they had no faults at all.

"It seems like all Alfred and I do any more is fight. I've been so upset, I've lost 20 pounds."

"Why don't you just leave him then?"

"Oh, no! Not until I've lost another five pounds."

"He has all the virtues I dislike and none of the vices I admire."

She said: As a single, never married woman in my 40s, I have been questioned endlessly about my status by my friends, relatives and co-workers. Over the years, I've noticed a subtle change in the nature of their inquiries.

In my teens, friends would ask, "Who are you going out with this weekend?"

In my 30s, co-workers might inquire, "So, are you dating anyone yet?"

Now, people ask, "Where did you get that adorable purse?"

Did you ever notice that when you blow in a dog's face, he gets mad at you, but when you take him for a car ride, he sticks his head out the window?

A man pacing back and forth glanced at his watch and yelled upstairs to his wife, "Honey, are you ready yet?"

Shouting back, the woman replies, "For crying out loud, Ed. I've been telling you for the last half hour, I'll be ready in a minute!"

When everything's coming your way, you're in the wrong lane.

Arriving home from work at my usual hour of 5 p.m., I discovered that it had not been one of my wife's better days. Nothing I said or did seemed to be right. By 7 p.m., things had not changed, so I suggested I go outside, pretend I had just gotten home and start all over again. My wife agreed.

I went outside, came back in and with a big smile, announced, "Honey, I'm home!"

"And just where have you been?" she replied sharply. "It's after seven o'clock!"

It’s not our disadvantages or shortcomings that are ridiculous, but rather the studious way we try to hide them, and our desire to act as if they did not exist.