Every trial endured and weathered in the right spirit makes a soul nobler and stronger than it was before. 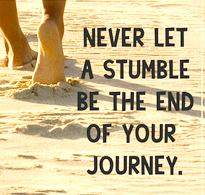 We are coming off of a frigid weekend with subfreezing temperatures accompanied by arctic winds. Since we never got our igloo built we hibernated huddled up inside our home. I truly felt for those less fortunate.

The very fact that there are folks who everyday survive the toughest of times makes me grateful that so many of us have been spared.

I do however have great admiration for the survivors, those not just surviving the weather but surviving what life often throws at us. There is something special about these people who keep their head up and go on in spite of adversity, for me they are an inspiring.

Here is a piece that describes the burdens some folks cary my hope is that their happiness must not wait until the end.

We’ll all get our happy ending someday.

It is interesting to notice how some minds seem almost to create themselves, springing up under every disadvantage, and working their solitary but irresistible way through a thousand obstacles.

Egosurfing - Scanning the Net, databases, etc., for one's own name.

Oh-no-second - That minuscule fraction of time during which you realize you've just made a terrible-terrible error.

Seagull Manager - A manager who flies in, makes a lot of noise, dumps on everything and then leaves.

Under Mouse Arrest - Getting busted for violating an online service's rule of conduct. "Sorry I couldn't get back to you. AOL put me under mouse arrest."

Every time you lend money to a friend, you damage his memory.

Three priests are chatting when the first priest says he's going to give up red meat for lent.

The second priest thinks for a minute and says he's going to give up sweets for Lent.

The third priest's attention had wandered to a passing woman wearing 4 inch heels and a tiny skirt when the first priest asks him what he was going to give up for lent.  After regaining control of himself he returns to the conversation and replies, 'Celibacy.'

When they discover the center of the universe, a lot of people will be disappointed to discover they are not it.

A man said to his wife one day, "I don't know how you can be so stupid and so beautiful all at the same time."

Nothing is easy to the unwilling.

She said: It was the third day my husband, Joe, had been in the intensive care unit following his fifth surgery for the removal of most of his remaining small intestine. The surgery took many more hours than expected. Joe was older and weaker, and he wasn't responding.

As I sat beside his bed, two nurses tried repeatedly to get him to cough, open his eyes, move a finger - anything to let them know he could hear them. He didn't respond. I sat praying to God to please help Joe respond - any sign that he might survive.

Finally, one of the nurses turned to me and suggested that perhaps if she knew something personal about our family, she could try to stimulate his response with that knowledge. She said, "Maybe you, as his daughter, could help us with such information."

I smiled and said, "I'll be happy to give you personal information, and thank you for the compliment, but I'm his wife of forty-three years, not his daughter, and we're about the same age."

The nurse looked at me and said, "The entire staff thought you were his daughter and had even commented how wonderful they thought it was that his daughter was with him all the time."

As they were expressing how I looked so young, a little cough came from my husband, and we all turned to stare at him. He didn't open his eyes, but loud and clear he said, "She dyes her hair!"

Don't go to your high school reunion. There'll be a lot of old people there claiming to be your classmates.

Bob and Bill were sitting in a bar, and Bob was looking really down in the dumps.

"I don't' get it," Bob sighed. "The dating scene is so confusing. There are so many damn people you have to please. "Like this one woman, she liked me, her mom liked me, but her father hated me. "Then there was this other woman, both of her parents really liked me, but SHE didn't like me. "And then there was this woman I met last night. She absolutely loved me, her parents seemed to really like me too, BUT her husband couldn't stand me!"

Any child can tell you that the sole purpose of a middle name is so he can tell when he's really in trouble with Mom.

A frustrated father vented, "When I was a youngster, I was disciplined by being sent to my room without supper. But in my son's room, he has his own color TV, telephone, computer, and CD player."

"So what do you do?" asked his friend.

"I send him to MY room!" exclaimed the father.

Going through difficult times augments our capacity for pleasure: it keeps us from taking pleasure for granted, reminds us to be grateful for all the large and small pleasures in our lives.