The people around you can enrich your life

Today, give yourself permission to be outrageously kind, irrationally warm, improbably generous. I promise it will be a blast. 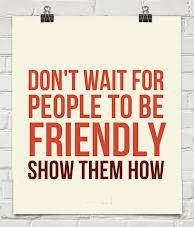 I hope all is well with you. I am a little worn out from a really full day yesterday and not looking forward to eliminating my backlog today so I am again dipping into the archives to send you a Daily from the past. I’ll do better tomorrow.

A few days ago I went to the hospital to start my weekly Iron IV’s. It has been probably a year ago or more since I was last in the oncology outpatient department getting the same treatments. There was a male nurse on duty that I knew from earlier treatments and it allowed us to quickly get at the business of the day as well as share some hospital gossip. As I was sitting in the chair with my IV hooked-up the gal who cleans the area each morning came by, she greeted me like an old friend and spent a minute or two asking how I was as we exchanged a little bit of family news. It got me thinking about how much people from all walks of life have made my life a little better. In fact I have often found that the high profile, big achievers I have met are not all that warm or even interesting. Some of the best moments of my life have been spent just learning more about an interesting stranger or new friend. I guess that is why I like the following story so much.

During my second month of nursing school, our professor gave us a pop quiz. I was a conscientious student and had breezed through the questions, until I read the last one: "What is the first name of the woman who cleans the school?" Surely, this was some kind of joke.

I had seen the cleaning woman several times. She was tall, dark-haired and in her 50s, but how would I know her name? I handed in my paper, leaving the last question blank.

Just before class ended, one student asked if the last question would count toward our quiz grade. "Absolutely," said the professor. "In your careers, you will meet many people. All are significant. They deserve your attention and care, even if all you do is smile and say 'hello'." "I've never forgotten that lesson. I also learned her name was Dorothy.

Treat everyone as if they are the most important person in the world, because to themselves they are.

This still boggles my mind.

Aoccdrnig to a rscheearch at Cmabrigde Uinervtisy, it deosn't mttaer in waht oredr the ltteers in a wrod are, the olny iprmoatnt tihng is taht the frist and lsat ltteer be in the rghit pclae. The rset can be a taotl mses and you can sitll raed it wouthit porbelm. Tihs is bcuseae the huamn mnid deos not raed ervey lteter by istlef, but the wrod as a wlohe.

I prefer to describe my profession as that of a "Contemporary Anthropological Interactive Observer" because it has just the right amount of flair. . . .

Besides, "stalker" is such an ugly word.

A man was in a terrible auto accident, and his "manhood" was mangled and torn from his body. His doctor assured him that modern medicine could give him back his manhood, but that his insurance wouldn't cover the surgery, since it was considered cosmetic. The doctor said the cost would be $14,000.

The man was not sure what to do our the size to choose, the doctor urged him to talk it over with his wife before he made any decision. The man called his wife on the phone and explained their options. The doctor came back into the room, and found the man looking dejected.

"Well, what have the two of you decided?" asked the doctor.

The man answered, "She'd rather remodel the kitchen."

The things that come to those that wait may be the things left by those who got there first.

A missionary heard about a native who had five wives.

"You are violating a law of God," he said, "so you must go and tell four of those women you can no longer live here or consider you their husband."

The native thought a few moments, then said, "Me wait here.  You tell 'em."

The person who agrees with everything you say either isn't paying attention or plans to sell you something.

A man entered a stationery store and asked the clerk for a birthday/anniversary card. The clerk replied, "We have birthday cards and we have anniversary cards. Why not take one of each?"

The man said, "You don't understand. I need a card that covers *both* events! You see, we're celebrating the fifth anniversary of my wife's thirty-fourth birthday..."

To find a fault is easy; to do better may be difficult.

The manager said, "You're enjoying our food, so you should pay us for it."

Abraham refused to pay and the restaurant sued him. At the hearing, the judge asked the restaurant to present their side of the case. The manager said, "Every day, this man comes and sits outside our kitchen and smells our food while eating his. It is clear that we are providing added value to his poor food and we deserve to be compensated for it."

The judge turns to Abraham and said, "What do you have to say to that?"

Abraham didn't say anything but stuck his hand in his pocket and rattled the few coins he had inside.

The judge asked him, "What is the meaning of that?"

Abraham replied, "I'm paying for the smell of his food with the sound of my money."

Morty and Sarah had just returned home from a party. Sarah said, "Do you realize what you did tonight, Morty?"

"What's the usual tip?" a man growled when a college boy delivered his pizza.

"Well," the student replied, "this is my first delivery, but the other guys said that if I got a quarter out of you, I'd be doing great."

"That so?" grunted the man. "In that case, here's five dollars."

"Thanks," the student said, "I'll put it in my college fund."

"By the way, what are you studying?"

"Starbucks announced this week that from now on new Starbucks employees will be required to go through 32 hours of training.

The first hour Starbucks employees learn how to make a cup of coffee, then the next 31 hours they learn how to charge $4 with a straight face."

In a department store, a difficult customer and a patient clerk were having a hard time getting together. Nothing the clerk provided was suitable. Finally, the finicky shopper said in annoyance, "Can't you find a smarter clerk to serve me?"

"No," said the saleswoman. "The smarter clerk saw you coming and disappeared."

People who matter are most aware that everyone else does, too.