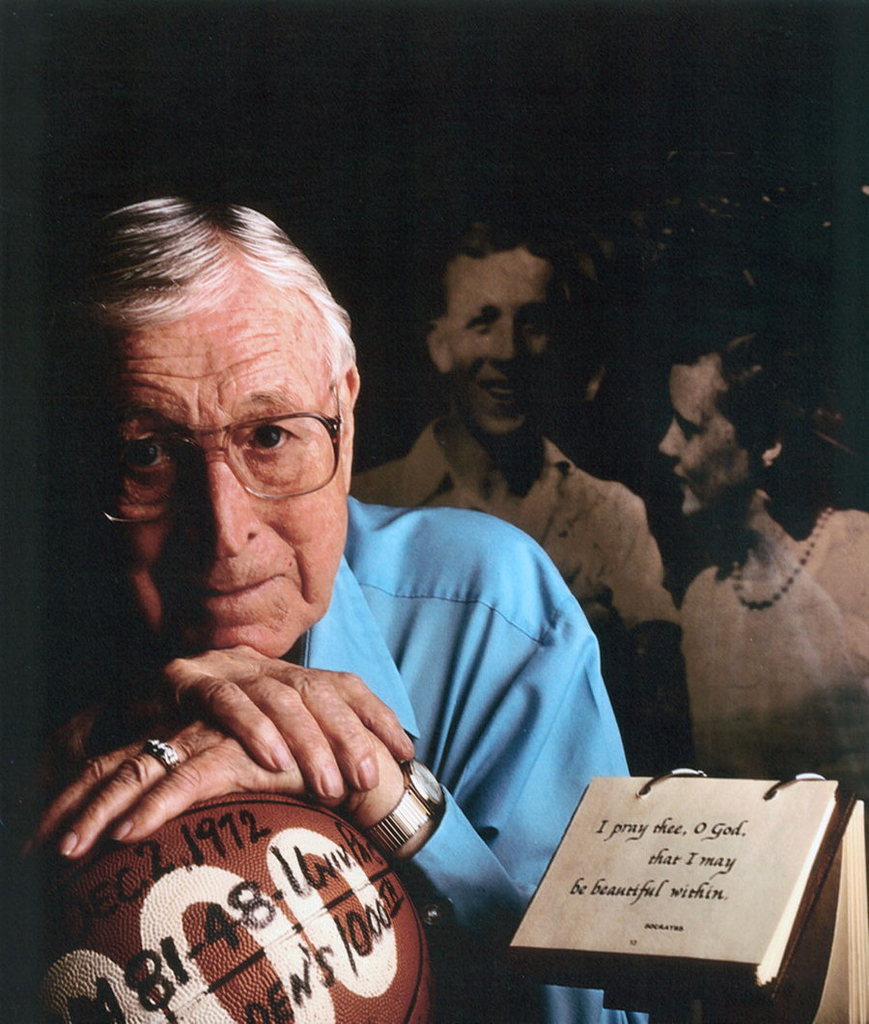 Coach John Wooden passed away recently and as you may know he was from Indiana and will always be revered not just for his basketball prowess but for his strength of character. I am often distressed with how we have become so impatient that we fail to invest in solutions that require time and effort. Coach Wooden taught his players the skills required to both cope and succeed through the quality of effort. Unfortunately far too many of us look for shortcuts finding it easier to blame others for our problems. Sadly many seem to expect they should have it all but depend on someone else to provide it for them.

Not too long ago John Gordon sent me this excerpt from one of his books that describes the Wooden philosophy. We all can benefit from what he wrote.

If you read my book Training Camp you know I was influenced deeply by Coach Wooden. In this spirit here are 7 lessons I learned from him.

1. Success Is All About the Little Things - On the first day of practice Coach Wooden didn't discuss basketball strategy. Believe it or not, he taught his players the proper way to put on their socks and shoes so they didn't get blisters.

2. Focus on the Process, Not the Outcome - Coach Wooden didn't focus on winning. He focused on the character of his team, key fundamentals, daily improvement, effort, potential and selfless teamwork. As a result he won...a lot.

3. There's No Such Thing as an Overnight Success - Wooden was at UCLA 16 years before they won their first national title. Today we live in a world where people expect instant results. If a coach doesn't win a title in a few years he or she is fired. Wooden is a testament that greatness takes time.

4. Selfless Teamwork is Great Teamwork - Wooden said, "A player who makes a team great is much more valuable than a great player."

5. There's Power in Humility - Norman Vincent Peale said that humble people don't think less of themselves. They just think of themselves less. Wooden made his life about coaching, leading and developing others and in doing so exhibited true power.

6. Faith Matters - In our politically correct world where people are afraid to mention God, even though it says it on our dollar bill, I find it interesting how in all the media reports about Wooden they talk positively about how his faith guided his life, principles and actions. There is power in faith. More importantly there is enormous power when your faith moves you to love, serve, inspire, coach and make a difference.

7. Your Legacy Matters - The most important thing you will leave behind when you die is your legacy. And the greatest legacy you can leave is your life, your principles and the lives you touch. Wooden didn't spend his life amassing wealth and trying to make a fortune. He invested in others. And while buildings will fall, jewelry will tarnish and money will get spent, his legacy will live on in those who carry his teachings in their heart.

She said, you know it's a bad date when:

You order a Double Whopper and he says, "Hey, my name ain't Rockefeller, honey!"

You've never heard someone speak with such passion about an ant farm.

He seems to know an awful lot about yourshower routine.

Your dinner reservations are under, "Loser, party of 2."

He's especially proud of how long he can sustain a burp.

Calls to tell you he'll pick you up, just as soon as the stand off with the police is over.

He's been on Geraldo once and Jerry Springer, twice.

"Few things are harder to put up with than a good example."

A fellow stopped at a rural gas station and, after filling his tank, he paid the bill and bought a soft drink. As he stood by his car to drink his cola, he watched a couple of men working along the roadside.

One man would dig a hole two or three feet deep and then move on. The other man came along behind and filled in the hole. While one was digging a new hole, the other was about 25 feet behind filling in the old. The men worked right past the fellow with the soft drink and went on down the road.

"I can't stand this," said the man, tossing the can in a trash container and heading down the road toward the men.

"Hold it, hold it," he said to the men. "Can you tell me what's going on here with this digging?"

"Well, we work for the county," one of the men said.

"But one of you is digging a hole and the other fills it up. You're not accomplishing anything. Aren't you wasting the county's money?"

"You don't understand, mister," one of the men said, leaning on his shovel and wiping his brow.

"Normally there's three of us ... me, Rodney and Mike. I dig the hole, Rodney sticks in the tree and Mike here puts the dirt back. Now just because Rodney's sick, that don't mean that Mike and me can't work."

We should all swap problems; everyone knows how to solve the other fellow's.

She told me: My husband is wonderful with our baby daughter, but he often turns to me for advice. Recently, I was in the shower when he poked his head in to ask, "What should I feed Lily for lunch?"

A few minutes later, my cell phone rang. I hopped out of the shower to answer it and heard my husband saying, "Yeah, hi, honey. Uh, what should I feed Lily for lunch?"

Legend has it that a certain college philosophy professor asked one question on his final exam. He picked up a chair, put it on his desk and wrote on the board, "Using everything we have learned this semester, prove that this chair does not exist."

The students dug deep and wrote like crazy for the whole exam period, some of them churning out thirty pages of heady philosophical debate and logic.

But only one student earned an A and he wrote for only a few seconds. His paper read in full, "What chair?"

Mrs. Cohen answered, "So did my arthritis!"

Success is peace of mind which is a direct result of self-satisfaction in knowing you did your best to become the best you are capable of becoming.