Soon it will be with us 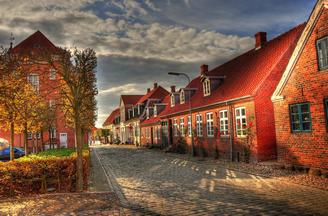 Yesterday was Labor Day, a national holiday in my country so I joined with friends and neighbors and took the day off. Labor Day has special significance as it is traditionally viewed as beginning of the countdown to Autumn. Summer has been trying to hold on over the past few days by providing us torrid temperatures where I live but the it will start to moderate today.

As we enter the last quarter of the year our children are back in school, summer vacations are but a memory as we return to active working lives for most folks and sustainable activities for retirees like me. Happily the weeks ahead will be filled with color as the trees and bushes prepare for their annual hibernation as the leaves begin to leave their branches waiting to grow again in the spring.

For me it is one of my favorite times of the year. I find the brisk weather invigorating. The season abounds with things to do, theatre, festivals and more are in full swing. Not only that we get to break out our favorite sweaters, jackets and the like that have been hiding in drawers and closets since spring.

I know some of you in other parts of the world will soon enjoy your spring and others, even in my country, live in climates that keep autumn hidden away in the north. I am sorry that you will be deprived of the wonders that nature will provide those of us who are more fortunate.

There's a crispness in the air that greets the morning sun, a feeling of anticipation, a new day has begun.

Harvest days are ending, winter is drawing near, yet in between is surely the most special time of year.

They call it Indian Summer, and it seems to fit the bill, for it's as if the Lord took a feathered brush and painted all the hills.

Now as I sit contented, atop of one of these, a book in hand to pass the time, the sound of a gentle breeze,

I can almost imagine an Indian child upon this mountaintop, looking down at the land of her forefathers, lost within her thoughts

For in every person’s lifetime some heartache may occur, but on these hills in quiet solitude, God helps us to endure.

So I say that the eyes are a window, beauty is found within the soul, and upon the hills of Autumn, that are strewn with red and gold.

“Fall has always been my favorite season. The time when everything bursts with its last beauty, as if nature had been saving up all year for the grand finale.”

During a recent ecumenical gathering, a secretary rushed in shouting, "The building is on fire!"

The Methodists gathered in the corner and prayed.

The Baptists cried, "Where is the water?"

The Quakers quietly praised God for the blessings that fire brings.

The Lutherans posted a notice on the door declaring the fire was evil.

The Roman Catholics passed the plate to cover the damage.

The Jews posted symbols on the door hoping the fire would pass.

The Congregationalists shouted, "Every man for himself!"

The Fundamentalists proclaimed, "It's the vengeance of God!"

The Episcopalians formed a procession and marched out.

The Christian Scientists concluded that there was no fire.

The Presbyterians appointed a chairperson who was to appoint a committee to look into the matter and submit a written report.

The secretary grabbed the fire extinguisher and put the fire out.

i'M NEW TO THIS. wHAT IS THIS "cAPS lOCK" BUTTON FOR?

Ole and Lena had married under none too happy circumstances, and their married life had not been anything to brag about either. But when, after they had been liveing together for thirty five years, Ole went to the local judge to ask for an annulment, the whole of Middleton gasped with amazement. A date for the hearing was set, however, and when the time came the judge demanded to know the grounds on which Ole based his demand for an annulment. "It's like this, your Honor," answered Ole, "I've just learned that Lena's father never had a license to carry a gun."

"I don't have to attend every argument I'm invited to."

A plane hit a patch of severe turbulence and the passengers were holding on tight as it rocked and reeled through the night. A little old lady turned to a minister who was sitting behind her and said, "You're a man of God. Can't you do something about this?"

"Those who were seen dancing were thought to be insane by those who could not hear the music."

"Now this is the verbal part of your employment test," said the interviewer. "Can you tell me what gross aggrandized annuity means?"

"Certainly," replied the applicant. "It means I absolutely don't get the job."

When I'm finally holding all the cards, why does everyone decide to play chess?

Two city swingers were walking in the country when one of them spotted a bug walking across the road. "What kind of bug is that?" he asked his companion. The companion leaned over and looked at the bug. "It's a lady bug." The first man looked at the bug again, then at his friend, and said: "Man, you sure got good eyes."

“No spring nor summer beauty hath such grace as I have seen in one autumnal face."