“Remember that guy that gave up? Neither does anyone else.” 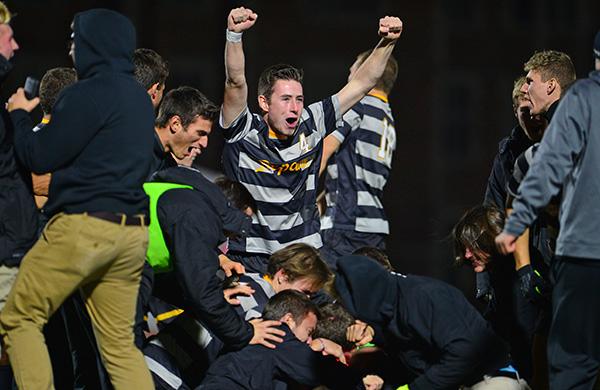 Hi everybody I am back. My oral surgery went well, my bout with apparent food poisoning not so well, but I am getting back and that is good.

The best medicine that I have received in the last few days was learning that my grandson Justin, a freshman at DePauw University, made the winning shot in the shoot out that followed two overtime periods in their NCAA soccer tournament. This win puts DePauw in the sweet 16 round for the first time in the school’s history. That’s him in today’s picture.

Now it is time for me to restart my health regimen. My cruise sailed without me, but my spine is less painful, my oral surgery went well so it is back to the gym and daily exercise. My Doc’s have Okayed a slow start while I build back. We all have interruptions in our lives over the years the secret is not to let them stop you. Here is a short poem that can serve us all well

When things go wrong, as they sometimes will,

When the road you're trudging seems all up hill,

When the funds are low and the debts are high,

And you want to smile, but you have to sigh,

When care is pressing you down a bit,

Rest if you must, but don't you quit!

Life is queer with its twists and turns,

As every one of us sometimes learns,

And many a failure has turned about,

When they might have won had they stuck it out.

Don't give up though the pace seems slow,

You may succeed with another blow!

Often the goal is nearer than It seems to a faint and faltering one,

Often the struggler has given up

And they learned too late, when the night slipped down,

How close they were to the golden crown.

Success is failure turned inside out,

The silver tint to the clouds of doubt.

And you never can tell how close you are,

It may be near when it seems so far.

So stick to the task when you're hardest hit,

It's when things seem the worst, that you must not quit!

“Life is like riding a bicycle. To keep your balance, you must keep moving.”

While walking through the woods one day, I was surprised to hear a child's voice. I followed the sound, trying in vain to understand the child's words. When I spotted a boy perched on a rock, I realized why his words had made no sense: He was repeating the alphabet.

"Why are you saying your ABC's so many times?" I asked him.

I couldn't help but laugh. "Prayers? All I hear is the alphabet."

Patiently the child explained, "Well, I don't know all the words, so I give God the letters. He knows what I'm trying to say."

A professor was giving a big test one day to his students. He handed out all of the tests and went back to his desk to wait. Once the test was over the students all handed the tests back in. The professor noticed that one of the students had attached a $100 bill to his test with a note saying "A dollar per point." The next class the professor handed the graded tests back out. This student got back his test, his test grade, and $64 change.

Do people in Australia call the rest of the world "up over"?

Helen and Amanda were discussing their busy schedules.

Helen said, "Amanda, I must ask you something. Every day I feel incredibly run down and tired. And yet, I see you looking as fresh as a rose. I have to know: what's your secret?"

"My secret? Every morning, without fail, I wake up at six o'clock sharp."

"Yes, and then I look at the clock, see what time it is, and go back to sleep for another four hours."

I had a linguistics professor who said that it's man's ability to use language that makes him the dominant species on the planet. That may be. But I think there's one other thing that separates us from animals. We aren't afraid of vacuum cleaners.

One day the first grade teacher was reading the story of the Three Little Pigs to her class. She came to the part of the story where the first pig was trying to accumulate the building materials for his home.

She read, "...And so the pig went up to the man with the wheelbarrow full of straw and said, "Pardon me sir, but may I have some of that straw to build my house?'" The teacher paused then asked the class, "And what do you think that man said?"

One little boy raised his hand and said, "I think he said, "'Holy Crap! A talking pig!'"

The teacher was unable to teach for the next 10 minutes.

A boy becomes an adult three years before his parents think he does and about two years after he thinks he does.

A group of junior-level executives were participating in a management training program. The seminar leader pounded home his point about the need to make decisions and take action on those decisions.

"For instance," he said, "if you had five frogs on a log and three of them decided to jump, how many frogs would you have left on the log?"

The answer from the group was unanimous, "Two."

"Wrong," replied the speaker. "There would still be five, because there is a difference between deciding to jump and jumping."

“Don’t let the fear of the time it will take to accomplish something stand in the way of your doing it. The time will pass anyway; we might just as well put that passing time to the best possible use.”