Life is really simple, but we insist on making it complicated. 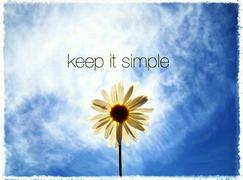 Well my friends here we are at the beginning of another new year. I don’t know about you but I plan on keeping things simpler this year. I am not going to worry about what I can’t do anymore, instead I am going to be grateful that I can still do more than enough.

I have come to learn over the years that there is little use in agonizing over the fact that others are now the decision makers in organizations where I no longer have a role to play. I also have learned many times that there is no useful purpose in getting stressed over things I have no control over. So I plan on keeping things simple while concentrating on making each day a good one.

Here is an article from the Positivity Blog that I really like, you might find it useful as well.

3 Quick Questions for a Simpler and Happier 2017

It’s very easy to spend a lot of time on things that do not really matter much. To spend hours, days or even weeks on being angry at someone, replaying a mistake or failure in one’s mind or to dwell on something negative and feeling more and more like a victim.

So I try to ask myself this question as often as I can to question and confront my own thoughts.  To catch myself and to wake myself up when I get stuck in negative thought loops going round and round.

By doing so I:

2. What is one very small step I can take right now to get the ball rolling?

Because it makes things easier. Makes them feel lighter.

This question prevents me from trying to escape into procrastination and helps me to avoid the side-effects of that such as sinking self-esteem and simply a lot of time being wasted on trying to hide.

This one helps me to simplify.

To find a lightness in life where I do not have to carry around 5 tons of unnecessary mental baggage.

It is a truly wonderful question.

It is the sweet, simple things of life which are the real ones after all.

A guy sees a sign in front of a house: "Talking Dog for Sale." He rings the bell and the owner tells him the dog is in the backyard. The guy goes into the backyard and sees a black mutt just sitting there.

The mutt looks up and says, "Well, I discovered this gift pretty young and I wanted to help the government, so I told the CIA about my gift, and in no time they had me jetting from country to country, sitting in rooms with spies and world leaders, because no one figured a dog would be eavesdropping. I was one of their most valuable spies eight years running. The jetting around really tired me out, and I knew I wasn't getting any younger and I wanted to settle down. So I signed up for a job at the airport to do some undercover security work, mostly wandering near suspicious characters and listening in. I uncovered some incredible dealings there and was awarded a batch of medals. Had a wife, a mess of puppies, and now I'm just retired."

The guy is amazed. He goes back in and asks the owner what he wants for the dog.

The guy says, "This dog is amazing. Why on earth are you selling him, so cheap?"

The owner replies, "He's such a liar. He didn't do any of that stuff. "

A concerned Father asked his daughter if her latest beau was serious about their relationship.

"I'll say he is Daddy," she replied... "Why just last night he asked me how much you make, what kind of meals Mom serves, and if you guys are easy to get along with.

"Never ruin an apology with an excuse."

The Secretary of the Navy was inspecting a recently launched carrier. The entire crew stood at attention. "I suppose," said the Secretary jokingly to the carrier's captain, "you know the name of every man on the ship."

"I think I do," was the captain's unexpected reply.

"Aha," smiled the Secretary.  "What's the name of that man?"  he asked, pointing to a sailor standing two rows away.

The Secretary walked over and addressed the seaman himself.

"And what's your name, sailor?" he asked.

Two girls board a crowded bus and one of them whispers to the other, "Watch me embarrass a man into giving me his seat!"

Pushing her way through the crowd, she turned all of her charms upon a gentleman who looked like he might embarrass easily.  "My dear Mr. Wilson," she gushed, "fancy meeting you here on the bus.  Am I glad to see you!  Why you are almost a stranger.  My, but I'm tired!"

The sedate gent looked up at the girl.  He had never seen her before but he rose and said pleasantly, "Sit down, Mary, my girl.  It isn't often I see you on washday.  No wonder you are tired.  Being pregnant isn't easy.  By the way, don't deliver the wash until Thursday. My wife is going to the District Attorney's office to see whether or not she can get your husband out of jail."

Anyone Preying On My Mind Today Would Starve To Death

Pandora, a psychic and mystic,

But Walter, a nerd,

Who liked what he heard,

That's been one of my mantras - focus and simplicity. Simple can be harder than complex: You have to work hard to get your thinking clean to make it simple. But it's worth it in the end because once you get there, you can move mountains.