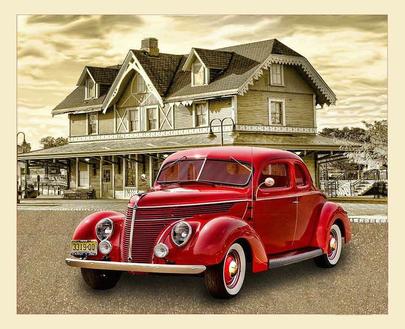 I am off this morning for a Pacemaker check and a visit with my favorite electrophysiologist to see how my cardiac electrical system is doing. I have been doing well in that department of late so I think we will ask each other what is going on and exchange Happy Thanksgiving greetings. He will continue to monitor my heart activity via my monthly internet transmission of my Pacemaker memory dump to the Medtronic’s computer in Minnesota.

Before I rush off I would like to send you something a Florida friend sent me years ago. Jack is no longer with us having passed some time ago but his good humor and kindness lives on in my memory and this piece is one of the reasons why.

"Hey " one of my kids asked the other day, "What was your favorite fast food when you were growing up?"

"We didn't have fast food when I was growing up," I informed him. "All the food was slow."

"C'mon, seriously. Where did you eat?"

"It was a place called 'at home,'" I explained. "Grandma cooked every day and when Grandpa got home from work, we sat down together at the dining room table, and if I didn't like what she put on my plate I was allowed to sit there until I did like it."

By this time, the kid was laughing so hard I was afraid he was going to suffer serious internal damage, so I didn't tell him the part about how I had to have permission to leave the table. But here are some other things I would have told him about my childhood if I figured his system could have handled it:

Some parents NEVER owned their own house, wore Levis, set foot on a golf course, traveled out of the country or had a credit card. In their later years they had something called a revolving charge card. The card was good only at Sears Roebuck. Or maybe it was Sears AND Roebuck. Either way, there is no Roebuck anymore. Maybe he died.

My parents never drove me to soccer practice. This was mostly because we never had heard of soccer. I had a bicycle that weighed probably 50 pounds, and only had one speed, (slow). We didn't have a television in our house until I was 11, but my grandparents had one before that. It was, of course, black and white, but they bought a piece of colored plastic to cover the screen. The top third was blue, like the sky, and the bottom third was green, like grass. The middle third was red. It was perfect for programs that had scenes of fire trucks riding across someone's lawn on a sunny day. Some people had a lens taped to the front of the TV to make the picture look larger.

I was 13 before I tasted my first pizza, it was called "pizza pie." When I bit into it, I burned the roof of my mouth and the cheese slid off, swung down, plastered itself against my chin and burned that, too. It's still the best pizza I ever had.

We didn't have a car until I was 15. Before that, the only car in our family was my grandfather's Ford. He called it a "machine." I never had a telephone in my room. The only phone in the house was in the living room and it was on a party line. Before you could dial, you had to listen and make sure some people you didn't know weren't already using the line.

Pizzas were not delivered to our home. But milk was. All newspapers were delivered by boys and all boys delivered newspapers. I delivered a newspaper, six days a week. It cost 7 cents a paper, of which I got to keep 2 cents. I had to get up at 4 AM every morning. On Saturday, I had to collect the 42 cents from my customers. My favorite customers were the ones who gave me 50 cents and told me to keep the change. My least favorite customers were the ones who seemed to never be home on collection day.

If you grew up in a generation before there was fast food, you may want to share some of these memories with your children or grandchildren. Just don't blame me if they bust a gut laughing.

Growing up isn't what it used to be, is it?

There are new words now that excuse everybody. Give me the good old days of heroes and villains, the people you can bravo or hiss. There was a truth to them that all the slick credulity of today cannot touch.

Boy is this true or what?

When a man needs a suit, he and his wife go to the store. The salesman and the wife make selections from the rack. The husband tries them on. The wife and the salesman discuss the fit, remarking on the fullness, thinness or any asymmetry of the husband's body. The jacket and pants are pulled, tucked, pleated and bunched in assessing the need for tailoring.

Once a suit is chosen, the wife and the store's tailor repeat the fitting procedure and then negotiate a date when the suit will be ready.

On leaving the store, the husband may talk if he wishes.

To belittle is to be little.

A cowboy rode into town and stopped at a saloon for a drink. Unfortunately, the locals always had a habit of picking on strangers, which he was. When he finished his drink, he found his horse had been stolen.

He went back into the bar, flipped his gun into the air, caught it above his head without even looking and fired a shot into the ceiling. "Which one of you sidewinders stole my horse?" he yelled with surprising forcefulness. No one answered.

"All right, I'm gonna have another beer, and if my hoss ain't back outside by the time I finish, I'm gonna do what i dun in Texas! And I don't like to have to do what I dun in Texas!" Some of the locals shifted restlessly. He had another beer, walked outside, and his horse was back! He saddled-up and started riding out of town.

The bartender wandered out of the bar and asked, "Say pardner, before you go... what happened in Texas?"

The cowboy turned back and said, "I had to walk home."

What's the difference between a boyfriend and a husband?

One night a wife found her husband standing over their baby's crib. Silently she watched him. As he stood looking down at the sleeping infant, she saw on his face a mixture of emotions: disbelief, doubt, delight, amazement, enchantment, skepticism.

Touched by this unusual display and the deep emotions it aroused, with eyes glistening she slipped her arm around her husband.

"A penny for your thoughts," she said.

“There are a few moments in your life when you are truly and completely happy, and you remember to give thanks. Even as it happens you are nostalgic for the moment, you are tucking it away in your scrapbook.”