Procrastination is the thief of time. 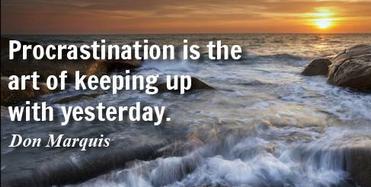 Lately we have discussed the value of making the best of each day while forgetting about yesterday and not worrying about tomorrow. I think for many of us procrastination steals opportunities from too many of our days. Nothing gets done without a start so if we fail to get moving today we will have lost an opportunity to do something that we might enjoy and possibly something noteworthy. Here are excerpts that I copied from a long article written by Isi Dixon that reminds me of how I was when I was younger before I decided that there is no time better than right now.

Procrastination is a little bit like an addiction, once you suffer from it you have got to battle it and keep on top of it for the rest of your life. It is so easy to slip back. But also, like any other addiction, it can be overcome.

1. A lot of people have a perfectionist trait; some more, some less. "I can't start this project until I have got everything I need and until the conditions are absolutely perfect." This kind of mindset is fine if that perfect condition is feasible and you have a good track record of starting and finishing your projects. If you don't, then your perfectionism is probably an excuse for not starting the project at all.

Turn it around and ask yourself, what is the minimum I need for this project? Once you've got that sorted, put a start date in your diary and get that project on the road.

2. "I work better under pressure." We all know people like that and we might have used that phrase ourselves. Again, there are two ways of dealing with this.

Number one, it's a good excuse not to start until the last possible moment, and it's simply a way to put things off. Make life easier for yourself; and divide your project into segments and do one each day until it's done.

Number two, if you literally work better under pressure, and some of us do, then make the project more challenging. Set mini-goals with a shorter deadline. This way you keep yourself on your toes but are still making timely progress towards your end goal.

3. If you suffer from a lack of self confidence and feel that you simply can't tackle the project try one of these options. Find out what the first thing is you need to do to start the project, the very first action that needs doing before anything else can be done. Do that, then find out the next step and so on. Also, divide the project into smaller chunks. Smaller bites are easier to digest, the same goes for project size. If you are unsure of how to do this, find someone who has done a similar project before and ask for advice. That way you get some expert help and you will soon be on the way to completing the once daunting task.

4. Internalising negatives means that you always look for faults within yourself. If you do this, you will quite easily come up with negative emotions, such as "I'm lazy that's why I don't get things done" or "I'm stupid that's why I don't know where to start". First of all, I can assure you that none of this is true. You are neither lazy nor stupid or anything else of that kind. You might lack motivation or not be an expert on a particular subject but you can easily do something about that.

Why don't you think of a treat that you reward yourself with, once you have completed the first part of the task and then keep rewarding yourself for every bit that you achieve until the project is completed. And just as with lack of self confidence, there is no shame in asking people for help and advice on how to tackle a particular project. We don't all have to reinvent the wheel and most people are very happy to share their skills and knowledge.

5. Externalised positives are usually the reverse side of the same coin as internalised negatives. It means that you attribute anything positive that you do to outside influences and not to your skills and abilities, such as "I was lucky last time and it was easy. I could never do that again." It is usually a sign of lack of self confidence.

Achieving something has most often nothing to do with luck. It is more likely to be the result of hard work and skill. Luck is good for gambling and that's about it. And when you found something easy then you had the skills and talent to do it and nothing less. Don't hide your light under a bush - as the saying goes and be proud of your achievements - especially when it comes to what you tell yourself. We are usually our own worst critics and forget to be our own strongest supporters.

She said: "It's just to hot to wear clothes today," said Jack as he stepped out of the shower.  "Honey, what do you think the neighbors would think if I mowed the lawn like this?"

"Probably that I married you for your money."

But seriously folks, plan to be spontaneous tomorrow.

Here are a few things we have learned over the years that might make your travels more pleasant...

Find the flusher. European bathrooms are strange but, don't panic it's in there somewhere.

If the front desk clerk at your hotel is behind bullet-proof plexiglas, find another hotel.

Swiss border guards carry machine guns and seem well versed in their use. Also their guard dogs can drive cars and are quick to take offence.

If you get on a ferry with 200 drunken Danish soccer fans, well ... you asked for it.

The other line always moves faster until you get in it.

A new missionary recruit went to Venezuela for the first time. He was struggling with the language and didn't understand a whole lot of what was going on. Intending to visit one of the local churches, he got lost, but eventually got back on track and found the place. Having arrived late, the church was already packed. The only pew with a seat open was the one on the front row.

So as not to make a fool of himself, this recruit decided to pick someone out of the crowd to imitate. He chose to follow the man sitting next to him on the front pew. As they sang, the missionary tried to follow along.

Then he perceived that the preacher was giving announcements. People clapped, so he looked to see if the man was clapping. He was, and so the recruit clapped too. Then the preacher said some words that he didn't understand and he saw the man next to him stand up. So he stood up too. Suddenly a hush fell over the entire congregation. A few people gasped.

He looked around and saw that nobody else was standing, so he sat down.

After the service ended, the preacher stood at the door shaking the hands of those who were leaving. When the missionary recruit stretched out his hand to greet the preacher, the preacher said, in English: "I take it you don't speak Spanish."

The missionary recruit replied: "No I don't. Is it that obvious?"

"Well yes," said the preacher, "I announced that the Acosta family had a new-born baby boy and would the proud father please stand up."

Procrastination is the bad habit of putting of until the day after tomorrow what should have been done the day before yesterday.