It's never too late

“Everything comes too late for those who only wait.” 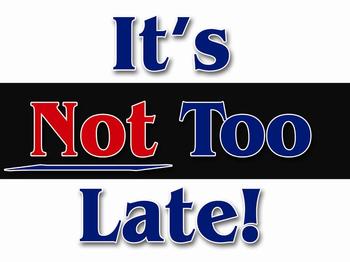 Yesterday I shared with you that I need more quiet time in my life as well as more uncommitted time that can be used as I wish. Later as I thought about it I again realized how time is finite while our possible use of it is almost unlimited. The bottom line is our personal time management can be much more rewarding when we spend some of it putting things in perspective and then making the things that are important to us priorities. Unfortunately time can never be banked so it is a case of − use it wisely or lose the opportunity to do so.

In truth no matter how old you are there is still time left, time to set some priorities and reap some rewards. It really is up to you. Are all things that fill your moments really that important? Do you need all the information that would help you win a game that you can’t play more important than spending quality time with someone you care about?

Here is a piece written by nationally known ethicist Michael Josephson that helped me rethink the years ahead. I recommend it as something you might want to revisit every once in awhile.

Ready or not, some day it will all come to an end. There will be no more sunrises, no minutes, hours or days. All the things you collected, whether treasured or forgotten will pass to someone else.

Your wealth, fame and temporal power will shrivel to irrelevance. It will not matter what you owned or what you were owed.

Your grudges, resentments, frustrations and jealousies will finally disappear. So too, your hopes, ambitions, plans and to do lists will expire. The wins and losses that once seemed so important will fade away.

So what will matter? How will the value of your days be measured?

What will matter is not your success but your significance.

What will matter is not what you learned but what you taught.

What will matter is every act of integrity, compassion, courage, or sacrifice that enriched, empowered or encouraged others to emulate your example.

What will matter is not your competence but your character.

What will matter is not how many people you knew, but how many will feel a lasting loss when you're gone.

What will matter is not your memories but the memories that live in those who loved you.

What will matter is how long you will be remembered, by whom and for what.

Living a life that matters doesn't happen by accident. It's not a matter of circumstance but of choice.

Choose to live a life that matters.

You cannot do a kindness too soon, for you never know how soon it will be too late.

In a stationery store, I quickly picked out a card for my wife for our anniversary. The clerk was surprised by how little time it took me, and she began relating a story about another customer who spent a half-hour searching for the right anniversary greeting. Noticing the man lingering over one card after another, the clerk went to see if she could help.  "Is there a problem?" she asked.

"Yes, there is," he replied ruefully.  "I can't find one my wife will believe."

"I bought some used paint. It was in the shape of a house."

The matchmaker said, "Mr. Cohen, don't let it get too late. I have exactly the one you need. Just say to me, ok, and you'll meet, and in no time, you'll be married to this fine women"

"Don’t bother Sadie, I have two sisters at home that handle all my needs."

"All well and good, Mr Cohen, but all the sisters in the world cannot fill the role of a wife."

"But Sadie, I didn't say they were my sisters."

I have the world's largest collection of seashells. I keep it on all the beaches of the world... perhaps you've seen it....

Two husbands, Bill and Bob, were discussing their married lives.

Although happily married, they admitted that there were arguments sometimes.

Then Bill said, "I've made one great discovery. I now know how to always have the last word."

"The problem with the designated driver program, it's not a desirable job. But if you ever get sucked into doing it, have fun with it. At the end of the night, drop them off at the wrong house."

“Be yourself. There is something that you can do better than any other. Listen to the inward voice and bravely obey.

Consider the case of Frederick II, an 18th-century king of Prussia. Frederick fancied himself an enlightened monarch, and in some respects he was. On one occasion, he is supposed to have interested himself in the conditions of a Berlin prison. He was escorted through it so that he might speak to the prisoners.

One after the other, the prisoners fell to their knees before him, bewailing their lot and, predictably, protesting their utter innocence of all charges that had been brought against them.

Only one prisoner remained silent, and finally Frederick's curiosity was aroused.

The prisoner looked up. "Yes, your majesty?"

"And are you guilty?"

"Entirely guilty, your majesty. I richly deserve my punishment."

At this Frederick rapped his cane sharply on the ground and said, "Warden, release this guilty wretch at once. I will not have him here in jail where by example he will corrupt all the splendid innocent people who occupy it."

Life's Tragedy is that we get old to soon and wise too late.