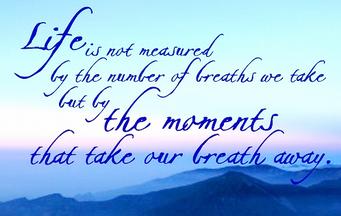 As many of you know I have a couple of hobbies, my main hobby is collecting friends another that I find rewarding is collecting stories, thoughts and quotes that I can share with you someday. Preparing the Daily over the years has been good for me since it requires me to think about the world and our place in it almost every day. It helps me focus on enriching my life as well as how to deal with some of the problems we all face as we age.

So thank you all for being there I am not sure how well I would do without those who are friends and without having you to read the Daily when you can.

As you also know I have collected a lot of Marc Chernoff’s writings over the years, today I want to offer you a few of the thoughts he recently included in an article entitled Things Your Soul Wants You to Know.

Just living is not enough... one must have sunshine, freedom, and a little flower.

An Irish friend of mine went to play golf some time ago; when he arrived he met a group of Hassidic Jews who invited him to play with them. He joins the group and tees off.  His shot is about 200 yards out and off to the right rough.  Reb Moshe tees off 300 yards straight out into the middle of the fairway.  Reb Yitzchak's shot is about 290 and Reb Yaacov's is 300, but slightly off center.  O'Brian has trouble with getting out of the rough and four-putts, while the rabbis' approach shots are right on the pin, they two-putt for par.

The rest of the round is the same, with the rabbi's scores either par or under par, while O'Brian has a 95.  He says to them, "You guys must play and practice all the time."

Reb Yitzchak says, "No, we study all the time and only play once a week. But, on our Sabbath, while we are in shul, we say a prayer asking God to give us one good round of golf each week."

I converted, I joined a shul, pray every week."

Rabbi Moshe says, "You joined a shul?  Which one?"

A recent medical survey reported on the causes of short term work illnesses, they results are listed below:

4. The I'm Looking for a New Job and I Don't Know How Long It's Going to Take, but I Want To Stay On The Payroll Until Then Mysterious Infection.

5. The My Boyfriend's Got the Week Off So Suddenly I'm Too Contagious To Come In To The Office Disease.

6. The I Need a Hair Cut and My Stylist Doesn't Make Evening Appointments Bout of Influenza.

7. The There's No Federal Holidays for Two Months and I Want a Day Off Sickness.

8. The It's Spring Break and I Want To Pretend I'm a Teenager Again General Ailment.

9. The I've Messed Up Royally and I Won't Come In To Face the Music Terminal Illness.

10. The I Really Am Sick and I've Got the Doctor's Bills and the Completed Medical Expense Reimbursement Forms to Prove It Infirmity.

"Clothes make the man. Naked people have little or no influence on society."

I'd had a pretty hectic day with my four-year-old. When bed- time finally came, I laid down the law: "We're putting on your p.j.s, brushing your teeth, and reading ONE book. Then it's lights out!"

Her arms went around my neck in a gentle embrace, and she said, "We learned in Sunday school about little boys and girls who don't have mommies and daddies."

Even after I'd been such a grouch, I thought, she was still grateful to have me. I felt tears begin to well up in my eyes, and then she whispered, "Maybe you could go be THEIR mom?"

But I have found that in the simple act of living with hope, and in the daily effort to have a positive impact in the world, the days I do have are made all the more meaningful and precious. And for that I am grateful.