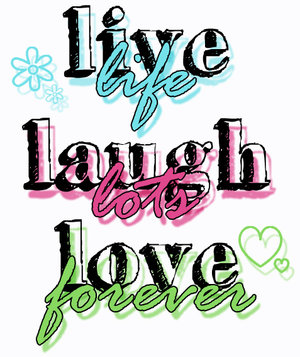 The most wasted of all days is one without laughter.


It is going to be a full day today leaving little time to write a new daily so here is another from years ago.

With all the turmoil in the world today we should be thankful that we are not caring the burdens of so many others. With what we have it is appropriate that we do what we can for others.

If you woke up this morning with more health than illness..........you are more blessed than the million who will not survive this week.

If you have never experienced the danger of battle, the loneliness of imprisonment, the agony of torture, or the pangs of starvation.......you are ahead of 500 million people in the world.

If you have food in the refrigerator, clothes on your back, a roof overhead and a place to sleep...you are richer than 75% of this world.

If you have money in the bank, in your wallet, and spare change in a dish someplace....... you are among the top 8% of the world's wealthy.

If your parents are still alive and still married........you are very rare, even in the United States.

If you hold up your head with a smile on your face and are truly thankful.....you are blessed because the majority can, but most do not.

If you can read now, you are more blessed than over two billion people in the world that cannot read at all.

Three things are necessary for the salvation of man:

to know what he ought to believe;

to know what he ought to desire;

and to know what he ought to do.

Have you ever noticed that when you're of a certain age, everything seems uphill from where you are? Stairs are steeper. Groceries are heavier. And, everything is farther away. Yesterday I walked to the corner and I was dumbfounded to discover how long our street had become!

And, you know, people are less considerate now, especially the young ones. They speak in whispers all the time! If you ask them to speak up they just keep repeating themselves, endlessly mouthing the same silent message until they're red in the face! What do they think I am, a lip reader?

I also think they are much younger than I was at the same age. On the other hand, people my own age are so much older than I am. I ran into an old friend the other day and she has aged so much that she didn't even recognize me.

I got to thinking about the poor dear while I was combing my hair this morning, and in doing so, I glanced at my own refection........Well, REALLY NOW- even mirrors are not made the way they used to be!

Another thing, everyone drives so fast today! You're risking life and limb if you just happen to pull onto the freeway in front of them. All I can say is, their brakes must wear out awfully fast, the way I see them screech and swerve in my rear view mirror.

Clothing manufacturers are less civilized these days. Why else would they suddenly start labeling a size 10 or 12 dress as 18 or 20? Do they think no one notices that these things no longer fit around the waist, hips, thighs, and bosom?

The people who make bathroom scales are pulling the same prank, but in reverse. Do they think I actually "believe" the number I see on that dial? HA! I would never let myself weigh that much! Just who do these people think they're fooling?

I'd like to call up someone in authority to report what's going on -- but the telephone company is in on the conspiracy too: they've printed the phone books in such small type that no one could ever find a number in here!

All I can do is pass along this warning: Maturity is under attack! Unless something drastic happens, pretty soon "everyone" of us will have to suffer these awful indignities.

PLEASE PASS THIS ON TO EVERYONE YOU KNOW AS SOON AS POSSIBLE SO WE CAN GET THIS CONSPIRACY STOPPED!

PS: I am sending this to you in a larger font size, because something has caused fonts to be smaller than they once were!

A southern belle was looking to buy a house. The seller said, "This house hasn't got a flaw in it!" The southern belle replied, "My lands! What do y'all walk on?"

A minister, a priest and a rabbi went for a hike one day. It was very hot. They were sweating and exhausted when they came upon a small lake. Since it was fairly secluded, they took off all their clothes and jumped in the water.

Feeling refreshed, the trio decided to pick a few berries while enjoying their "freedom." As they were crossing an open area, who should come along but a group of ladies from town. Unable to get to their clothes in time, the minister and the priest covered their privates and the rabbi covered his face while they ran for cover.

After the ladies had left and the men got their clothes back on, the minister and the priest asked the rabbi why he covered his face rather than his privates. The rabbi replied, "I don't know about you, but in MY congregation, it's my face they would recognize."

Life is like playing a violin solo in public and learning the instrument as one goes on.

A man goes to see the doctor because he has a sore throat. The nurse tells him to take all his clothes off and sit on the bench in the hall. The man tries to protest, but the nurse doesn't listen and just repeats the same orders then leaves the area. The man complies with her orders and joins another naked man sitting on the bench. The man starts complaining to the man already sitting there, that he only has a sore throat and doesn't understand why he has to take all his clothes off. The man who was already sitting on the bench nude, looks at the other man and says "You think that's bad, I'm just here to pay my bill."

"A man sent a postcard from Las Vegas to a friend:

Having a wonderful time.

Wish I could afford it."

A man owned a small farm in South Georgia. The Wage and Hour Department claimed he was not paying proper wages to his help and sent an social security agent to interview him.

"You just give me a list of your employees and tell me how much you pay them."

"Anybody else?" asked the agent as he scribbled on a note pad.

"Yeah," the farmer said. "There's a half-wit here. Works about eighteen hours a day. I pay him ten

dollars a week and give him chewing tobacco."

"You're talkin' to him now," said the farmer.

"You seem to have more than the average share of intelligence for a man of your background," sneered the lawyer at a witness on the stand. "If I wasn't under oath, I'd return the compliment," replied the witness.

Laughter is the closest thing to the grace of God.