The world is round and the place which may seem like the end may also be the beginning. 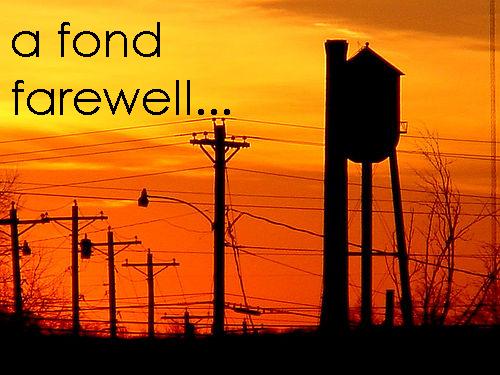 I often let myself fall into a minor funk when there is a new gap in my life. Most recently it was the disappearance of a valued friend, a person with whom I met regularly and who always provided stimulating conversation. I was able to determine that there appeared to be no medical or physical reason for the hiatus so I assume it just was something I did or it was time to move on.

Of course I am like everyone else, we all live in an ever changing world filled with both good and bad experiences. This year I have felt the loss of a community based program that provided me with new friends, stimulating discussions and outstanding learning experiences. My favorite movie theatre is about to close and it hasn’t been that long ago that one of my favorite performing arts series shut down.

Today I found myself again falling into the trap of remorse for what appears to be lost. Yep I was thinking of me first and not of those who really felt the brunt of the change. I know better than to do that, fortunately I stopped and regrouped. My lost friend probably needs to move on and I just hope not because of me but I am grateful for all the times we had together. The community based program that was so valuable is in the process of regrouping and I’ll have plenty of chances to help them swing back into action. It is the same with most everything we miss, if we never had it we wouldn’t miss it, so rather than just regretting the loss we need to be pleased that we had the times we did. My memory bank is filled with fond memories that are stored always ready to remind me about how lucky I’ve been.

So good bye past highlights, I am glad we had our time together and I wish you my very best as you move on. My life would not be nearly as good as it has been without you. And now as I have often said, there is no use leaving gaps unfilled so I am off to explore new tomorrows. Have fun, I know I will.

Why can't we get all the people together in the world that we really like and then just stay together? I guess that wouldn't work. Someone would leave. Someone always leaves. Then we would have to say good-bye. I hate good-byes. I know what I need. I need more hellos.

A man went to a therapist about an obsession that was ruining his life.

“It's baseball. Baseball is destroying me. I can't even get away from it in my sleep. As soon as I close my eyes, I'm out there chasing a fly ball or running around the bases. When I wake up, I'm more tired than I was when I went to bed. What am I going to do?”

The therapist told him, “First of all, you have to make a conscious effort not to dream about baseball. For example, when you close your eyes, try to imagine yourself at a party at which someone is about to give you several million dollars.”

The patient replied, “Are you crazy, Doc? I'll miss my turn at bat.”

"Don't aim for success if you want it; just do what you love and believe in, and it will come naturally."

A young Scottish lad and lassie were sitting on a low stone wall, holding hands, and just gazing out over the loch. For several minutes they sat silently, then finally the girl looked at the boy and said, "A penny for your thoughts, Angus."

The girl blushed, then leaned over and kissed him lightly on the cheek. Then he blushed.

Then the two turned once again to gaze out over the loch. After a while the girl spoke again. "Another penny for your thoughts, Angus."

The young man knit his brow. "Well, now," he said, "my thoughts are a bit more serious this time."

"Really?" said the girl in a whisper, filled with anticipation.

Why do we press harder on the remote when we know the battery is dead?

An old Indian chief sat in his hut on the reservation, smoking a ceremonial pipe and eyeing two US government officials sent to interview him. "Chief Two Eagles," asked one official, "You have observed the white man for 90 years. You've seen his wars and his material wealth.

You've seen his progress, and the damage he's done."

The chief nodded that it was so. The official continued, "Considering all these events, in your opinion, where did the white man go wrong?"

The chief stared at the government officials for over a minute and then calmly replied, "When white man found the land, Indians were running it. No taxes, no debt, plenty buffalo, plenty beaver, women did all the work, medicine man free, Indian man spent all day hunting and fishing, all night having sex."

Then the chief leaned back and smiled, "White man dumb enough to think he could improve system like that!"

If you yourself are at peace, then there is at least some peace in the world.

"I play golf in the low 80's," the little old man was telling one of the young boys at the club.

"Not really," said the little old man. "Any hotter and I'd probably have a stroke."

The beatings will continue until morale improves.

Mensa is an organization whose members have an IQ of 140 or higher. A few years ago, there was a Mensa convention in San Francisco and several members lunched at a local cafe.

While dining, they discovered that their salt shaker contained pepper and their pepper shaker was full of salt. How could they swap the contents of the bottles without spilling anything and using only the implements at hand? Clearly, this was a job for Mensa! The group debated and presented ideas and finally came up with a brilliant solution involving a napkin, a straw and an empty saucer. They called the waitress over to dazzle her with their solution.

"Ma'am," they said, "we couldn't help but notice that the pepper shaker contains salt and the salt shaker..."

"Oh," the waitress interrupted. "Sorry about that." She unscrewed the caps of both bottles and switched them.

“Appreciation is a wonderful thing. It makes what is excellent in others belong to us as well.”

A film crew was on location in the desert. One day, an old Indian went up to the director and said, "Tomorrow rain." The next day, it rained.

A week later, the Indian went up to the director and said, "Tomorrow storm." The next day, there was a hailstorm.

"This Indian is incredible," said the director. He told his secretary to hire the Indian to predict the weather. However, after several successful predictions, the old Indian didn't show up for two weeks. Finally, the director sent for him. "I have to shoot a big scene tomorrow," said the director, "and I'm depending on you. What will the weather be like?"

"People deal too much with the negative, with what is wrong. Why not try and see positive things, to just touch those things and make them bloom?"