If you have no confidence in self, you are twice defeated in the race of life. 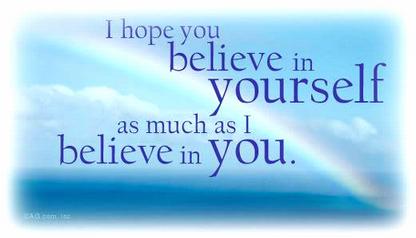 If you are like I am you sometimes run into people who seem to be down on themselves. They display little self-confidence and often give up before they even start a project. In my experience almost all of these folks are much better than they think they are and just need someone interested enough to help them realize the talents they do have.

You know we really don’t have to win medals nor receive plaudits from others to do well. Living a happy and satisfactory life is truly the measurement of personal success. Here is a piece I edited that was written by writer Christine Williams that is worth considering by my latent overachiever friends who have yet to reach their full potential.

Boost Your Confidence: 5 Ways To Silence Your Inner Critic

Let’s imagine that you have a friend who can be really critical. She lets you know when you’ve put on a few extra pounds. She makes you lose confidence right before an important presentation. She points out your flaws and reminds you when you’re not doing as well as others. If you had a friend like that, you’d kick her to the curb, right?! No one needs that negativity in their life! So, if we wouldn’t accept this criticism from our friends, why do we accept it from ourselves?

We let ourselves get away with a surprising amount of negative self-talk. Sometimes it happens so often that it becomes background noise, but this kind of criticism can be seriously damaging to your self-confidence. So what can you do to silence your inner critic? Here are five insightful tips:

LISTEN TO YOUR NEGATIVE THOUGHTS

This may seem counter-intuitive, but you can only silence your inner critic when you’re actually aware of it. I don’t mean feeding into it, but trying to listen as objectively as possible to those negative voices. A lot of times those negative thoughts stem from insecurities that are unmerited. Take the time to actually listen to what you’re telling yourself and you’ll find that oftentimes, those criticisms are silly. Actively listening to your negative talk will reveal that most of your criticisms are undeserved and ridiculous. If you wouldn’t say it to a friend, why say it to yourself?

Although some of our negative thoughts are unwarranted and overly judgmental, some of that criticism is toward real issues that need to be addressed. If there are certain parts of your life that you know need improving, do something about it. Don’t give yourself ammo for negative self-talk. There’s nothing worse than that nagging voice in your head that yet again you’re late on your deadline. And because you know it’s true, it can lead to a downward spiral of continually criticizing yourself.

Being nasty to yourself is never okay and it’s certainly not productive. Instead, take tangible steps to improve. Set goals and track your progress. Even if it’s baby steps, gradually improving yourself will replace negative thoughts with positive ones and ultimately silence your inner critic.

RE-THINK HOW YOU SEE OTHER PEOPLE

Negative thoughts of any sort are toxic to your soul. If you allow yourself to be critical and judgmental of others (admit it, we’ve all been there!), you’re only setting yourself up with the mentality that it’s okay to be critical of yourself, too. Hold off on gossip and stay away from rash judgments that may seem harmless. Feeding into the negativity will only come around to bite you in the butt.

ASK YOURSELF THIS QUESTION

Not sure if you’re being too critical of yourself? Life coach Tony Teegarden recommends asking this one question: Would you say this to your five year old self? Would you tell your five-year-old self that they’re not smart enough, that they’re overweight or untalented? Of course not! You’d tell them to believe in themselves and that they can do anything they set their mind to. So, if you wouldn’t dare be so negative to your younger self, why do it now?

REMIND YOURSELF OF HOW AWESOME YOU ARE

Sometimes the only way to silence your inner critic is to drown it out with positive statements. It doesn’t have to be as hokey as telling yourself positive affirmations in the mirror. But giving yourself a little pep talk when you’re really getting critical can do wonders. It’s not about bragging or trying to inflate your ego, it’s about being honest with yourself about what you do well.

Believe in yourself! Have faith in your abilities! Without a humble but reasonable confidence in your own powers you cannot be successful or happy.

One student in the back of the class raised his hand and when Called upon said, "Professor you're 44."

The Professor said, "You're absolutely correct, but tell me, how did you arrive at the answer so quickly?"

The student said, "You see professor, I have a brother, he's 22, and he's only half crazy."

Don’t bother me. I am in the midst of living happily ever after!

Miss Jones had been giving her second-grade students a lesson on science. She had explained about magnets and showed how they would pick up nails and other bits of iron. Later it was question time, and she asked, "My name begins with the letter 'M' and I pick up things. What am I?"

A little boy on the front row proudly said, "You're a mother!"

It is only with the heart that one can see rightly: what is essential is invisible to the eye.

Three older ladies were discussing the travails of getting older. One said, "Sometimes I catch myself with a jar of mayonnaise in my hand in front of the refrigerator and can't remember whether I need to put it away, or start making a sandwich."

The second lady chimed in, "Yes, some times I find myself on the landing of the stairs and can't remember whether I was on my way up or on my way down."

The third one responded, " Well, I'm glad I don't have that problem; knock on wood," as she rapped her knuckles on the table, then told them "That must be the door, I'll get it!"

When choosing between two evils, I always take the one I haven't tried before.

"So, what's the matter?" asked Becky. "I thought you just got back from a nice relaxing fishing trip with the old professor?"

"Oh, everything went wrong," says Mrs. Professor. "First he said I talked so loud I would scare the fish. Then he said I was using the wrong bait and then that I was reeling in too soon. "All that might have been all right; but then, to make matters worse," lamented Mrs. Professor, "I ended up catching the most fish!"

A dyslexic man walks into a bra.

The little boy was caught swearing by his teacher.

"Jeffrey," she said, "you shouldn't use that kind of language. Where did you hear it?"

"My daddy said it," he responded.

"Well, that doesn't matter," she explained, "you don't know what it means."

Human spirit is the ability to face the uncertainty of the future with curiosity and optimism. It is the belief that problems can be solved, differences resolved. It is a type of confidence. And it is fragile. It can be blackened by fear and superstition.