Be ready when plans change

Lighten up, just enjoy life, smile more, laugh more, and don't get so worked up about things. 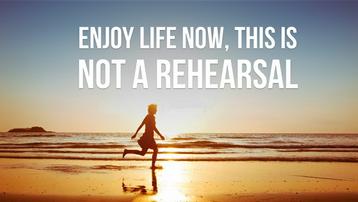 We had to cancel a trip today to a luncheon and play in Ohio today since my wife is suffering from some back pain. Our life lately requires some management as we have made commitments some time ago that are proving to be difficult to keep. We still plan on cruising in a few weeks so hopefully we both will be ok to go by then.

Sometimes basking in the golden sun of senior-hood takes some doing but we go on and yes with  smiles on our faces. At least the weather is great and we have plenty of food and lots of diversions. Fortunately we are our own boss and don’t require superior performance only happiness as we mosey along.

For those of you who are still in the trenches you might benefit from this list compiled by Tony Peeris from India years ago.

•Winning isn't everything but wanting to win is.

•You would achieve more, if you don't mind who gets the credit.

•When everything else is lost, the future still remains.

•Don't fight too much or the enemy will know your art of war.

•The only job you start at the top is when you dig a grave.

•If you don't stand for something, you'll fall for everything.

•If you do little things well, you'll do big ones better.

•Only thing that comes to you without effort is old age.

• You won't get a second chance to make a first impression.

•Only those who do nothing do not make mistakes.

•Never take a problem to your boss unless you have a solution.

•If you are not failing, you're not taking enough risks.

•Don't try to get rid of your bad temper by losing it.

•If at first you don't succeed, skydiving is not for you.

•There are two kinds of failures: Those who think and never do, and those who do and never think.

•All progress has resulted from unpopular decisions.

•Understanding proves intelligence, not the speed of the learning.

•There are two kinds of fools in this world.: Those who give advice and those who don't take it.

•The best way to kill an idea is to take it to a meeting.

“As you grow older, you’ll find the only things you regret are the things you didn’t do.”

Jack, a smart businessman, talks to his son Jack: I want you to marry a girl of my choice

Son: "I will choose my own bride".

Jack: "But the girl is Bill Gates's daughter."

Jack: "I have a husband for your daughter."

Bill Gates: "But my daughter is too young to marry."

Jack: "But this young man is a vice-president of the World Bank."

Finally Jack goes to see the president of the World Bank.

Jack: "I have a young man to be recommended as a vice-president."

President: "But I already have more vice-presidents than I need."

Jack: "But this young man is Bill Gates's son-in-law."

This is how business is done!!

Because so many people have heart attacks, the big, high-class casinos are now equipped with sophisticated defibrillators.  They are computer-controlled to deliver the precise level of electric shock needed to revive a heart attack victim.  That is, if you're at a high-class casino.

At the cheaper casinos downtown, they just drag you across the carpet and touch your finger to the doorknob.

To love is to stop comparing.

In a stationery store, I quickly picked out a card for my wife for our anniversary.  The clerk was surprised by how little time it took me, and she began relating a story about another customer who spent a half-hour searching for the right anniversary greeting.

Noticing the man lingering over one card after another, the clerk went to see if she could help.  "Is there a problem?" she asked.

"Yes, there is," he replied ruefully.  "I can't find one my wife will believe."

My wife keeps complaining I never listen to her ...or something like that.

An Outsider in a small Alabama town around Christmas time, saw a "Nativity Scene" that showed great skill and talent had gone into creating it. But one small feature was all wrong: the three wise men were wearing firemen's helmets. Totally unable to come up with a reason or explanation, he left.

At a "Quik Stop" on the edge of town, he asked the lady behind the counter about the helmets.

She exploded into a rage, yelling, "You darn Yankees never read your Bibles!"

The Outsider assured her that he did, but simply couldn't recall anything about firemen in the Bible.

She jerked her Bible from behind the counter and rifled through some pages, and finally jabbed her finger at a passage.

Sticking it in the guys face she said, "See, it says right here, 'The three wise men came from afar.'"

In all of living, have much fun and laughter. Life is to be enjoyed, not just endured.