Indy TweetUp on the 12th to Celebrate Twestival -- Whenever, wherever two tweeters meet, reflect and enjoy #twindy09 in a tweet.

It began on Feb 4th when I was tweavesdropping on a conversation between @nancymryland and @gregcooper . I asked if they would be interested in celebrating twestival with me on the 12th and they said yes!

Twitter is the preeminent emerging-technology used by social media advocates, architects and early adapters on every continent. It is a platform on which digital grassroots conversations occur in real time.

While being interviewed by Joe Dager - @business901 - for a podcast, I likened the twitter platform to a huge pick-up bar/dance-club, where you can walk over and chat with anyone. The person you approach has the option of interacting with you in 140 characters, or ignoring you.… Continue

What if Martin Luther King, Jr used twitter to spread the message of his dream?

While reviewing Direct Messages (DMs) and @replies early Sunday morning, I noticed that RicRaftis began following me on twitter. As with every new follower, I carefully reviewed his BIO to learn about his dreams and aspirations. Was he a twitter purist who wanted to authentically share his wisdom, or a Social Media Monger?

Indy Tweet Up was so wonderful -- Nine really interesting people sharing ideas, experience and a decent cup of joe.

I posted this blog initially on the comment board of the Group IP on Everything. That was the first group I created on Smaller Indiana. 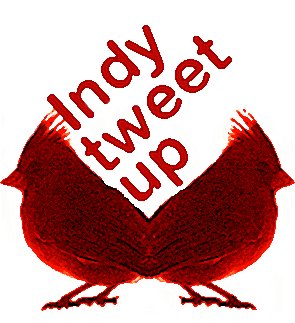 Wow.. We're up to 24 members! WooHoo! I am sorry that I didn't specifically invite this group to the Indy tweetup. Every time I meet-up with people I've grown to know over a virtual platform--like Smaller Indiana or twitter--I have a wonderful time and learn so much.

All attendees had a few… Continue

This is Hilarious. I am going to make my 13 yr old watch it. She will laugh AND learn an important lesson.

On NewYear’s Eve I participated in a twitter Rave – Social Media advocates could learn much from #nyetwarty and #happy09.

Have you ever dropped food into a pond and then hundreds of fish swarmed to the surface? How abut throwing potato chips up in the air at a beach filled with sea-gulls? (I don’t recommend that beach thing—it’s scary). On New Year’s Eve, while sitting alone in front of my computer, I experienced this swarm phenomenon -- virtually. I referred to it as a “happening” that night, but Princeton’s definition of… Continue

I was Christmas shopping with Mary, my mom, and sisters ten years ago at the Mole Hole in The Fashion Mall. It was a groovy little store with expensive knick-knacks and lots of fake trees dripping with ornaments for purchase. During one of those eerily quiet moments when everyone stops talking all at once, Mary said something that has been recounted several times throughout the last decade. She was reminiscing about growing up in Des Moines and the… Continue If you love dogs, peruse the photo section of Stark ReAlity.

I used a few photos from flickr and other Internet sources--e.g. the ashamed beagle puppy above can be found at Animaltalk.us .

All other dogs are Stark Dogs… Continue

Will people donate five minutes to a worthy cause they know nothing about?

A few weeks ago, I heard Larry Welke give a speech at a BPE meeting about his passion for the 501(c)(3) Children Without Limits --Video Storytelling Project. Since then, I had the pleasure of meeting him face to face on two separate occasions to learn more about this worthy cause.

As a social media advocate, I spent quite a bit of our face -to-face time discussing the communication paradigm shift, and how Social Media is changing the way… Continue

My Top Ten List of top 10 lists from list-makers I know. Who started this list making meme, anyhow?

A while back, Kyle Lacy and Lorraine Ball listed their favorite top 50 Indianapolis (and beyond) bloggers. This was a genius stroke of viral marketing, and it got me thinking. The image above is a screen shot of my iGoogle page. In the center you see Google’s intuitive Top 10 list of common results when people searched for “top 10”. Are there really 35 million "top 100 country songs" lists? Wow.

Everyone should have a gmail account so you can set up your own Google alerts….

…because sometimes there are random compliments out there you may miss.
____________________
“ Google Blogs Alert for: "Amy Stark" 9:28am
Top 50 + Bloggers in Indianapolis
By Kyle Lacy
Amy Stark: One of the smartest people I know and NFP extraordinaire! Recent Post: One Laptop Per Child. 18. Nicki Laycoax: Crazy. Cool. Marketer Recent… Continue

DID YOU KNOW? -- SHIFT HAPPENS

Let's get a laptop in the hand of every K-12 student in Indiana. They're doing it in Ethiopia, Borneo and Haiti

I donated $400 to the One Laptop per Child Initiative on New Year’s Eve last year. It was the last day to participate in the “Buy One Give One Program.” I donated to this 501(c)(3) rather than purchasing a new Dell Laptop because it did my soul good to know a child in Afghanistan would receive a laptop with meshed networking capabilities.

I slowly became disillusioned with the project because I… Continue

Don't go to this site unless you have 20 minutes to poke around.

Be sure to hit the FAQ Section. Very funny. A lot of creativity mixed with hard work.
When I encounter random "user-generated" brilliance on the Internet, I feel good about our future on earth. You don't ever see dolphins coming up with this stuff =)

When we start taking ourselves too seriously, we always get ourselves into trouble. Voltaire said, God is a comedian playing to an audience too afraid to laugh.…

I received a couple of emails from TED today that contained a video link.

The Video is horrendous, and please don't watch it if you are easily upset by images of sickness and extreme suffering. Since Smaller Indiana has always felt like a HOOSIER TED to me, I was compelled to post it and Smaller Indiana AND Stark… Continue

My Fellowship Win- Loss Ratio: 0-3, but I’m not bitter. What do you know about the International School of Indiana?

Fellowship Rejection One:
After getting my degree, I spent a few months trying to get a Fellowship to pay for Doctoral research. Non-profits are primarily using the Internet as a billboard or donation receptacle. I wanted to research how the Internet provides impassioned donors a platform where they could contribute ideas, not just Money. March 8, 2008—a day that will live in infamy.

The Benjamin Harrison Home in downtown Indy is using a twitter pseudonym (either that or the after-life has finally jumped on the Social Media Bandwagon).

Learning history through the stories of the people who lived it -- perfect. I now have a good twitter selling point. Conner Prairie should get a couple of trained docents to post tweets--just a couple a day, and schools should… Continue I know nothing about the website where I found this image, but I couldn't resist posting because it is HILARIOUS! (Thanks Stumble). I adore creativity like this. You should visit the website for a more detailed view-- the bottom right hand corner is labeled "Karma" and if you look closely, George Harrison is one of the Sitar Heroes.

My mom always says, "Who has more fun than… Continue

I received a couple of emails from TED that contained a link to a horrendous video.
Please don't watch if you are easily upset by images of sickness and extreme suffering. Since Smaller Indiana has always felt like a HOOSIER TED to me, I was compelled to post it on Smaller Indiana and Stark Reality. For those of you interested in how to use Social Media to get your message to as many of your early adapters as possible... this is the way to do it -- an ideal case study in the… Continue

I have a digg widget on my Google dashboard and I clicked an article about Warren Buffet--perhaps the wealthiest man on the face of the earth. Bill Gates and Warren play a version of one-up-manship by seeing who can donate the MOST amount of money to philanthropic causes.

Warren Buffett has been on my top ten hero list for some time, but after discovering he plays bridge online with… Continue